In the past, the backhoe loader’s name was a complete description of what it offered: a backhoe in the back and loader arms up front, nearly always fitted with a bucket.

But that’s been changing as compact equipment eats away at the market share of what once was a mandatory machine for any dirt-moving contractor.

“The backhoe loader, maybe more than any other ‘traditional’ piece of construction equipment, has been affected significantly by the explosion of compact equipment,” says Ed Brenton, product manager, Case Construction Equipment.

One way OEMs have kept backhoes competitive against compact equipment is by adding versatility – an important, but difficult challenge. The 97-horsepower New Holland B95C has a 14-foot 6-inch dig depth and 11-foot 5-inch height to hinge pin. Backhoe digging force is 12,969 pounds. Loader breakout force is 14,712 pounds and lift capacity is 11,118 pounds. (All figures are maximums and vary with configuration.) The B95C LR Long Reach model provides greater dig depth and a 22-foot 4-inch reach. The B95C TC Tool Carrier model features mechanical self-leveling of the loader both up and down.New HollandRyan Anderson, product marketing manager, New Holland Construction, says there are no backhoe-specific attachments such as a cold planer made for use with a compact track loader. Despite this, customers are ordering attachments, he says.

Brooms and forks are popular. Machines that retain a bucket on the front are often fitted with a 4-in-1 bucket for versatility. On the dipper, hydraulic hammer/breakers and compaction tools are the most common options, and a thumb is a staple component.

The intrusion of compact equipment into backhoe market share varies somewhat depending on the part of the backhoe catalog being considered.

Economics weighs into a customer’s choice of equipment. “A backhoe may be $100,000 and a compact track loader and compact excavator together may be $110,000,” Anderson says. “So for not much more money, you’re getting two very versatile pieces of equipment.” The 420 XE is one of five new models from Cat in the 14- and 15-foot size classes. Common to all five models is the use of a Cat C3.6 engine, adjustable auxiliary flow to the backhoe and a redesigned operator display featuring soft-key controls for simpler navigation. The 420 XE also has seat-mounted controls that swivel with the operator, electronic loader controls that enable selectable parallel lift and programmable loader kick-out and return-to-dig functions.CaterpillarBrenton says there are markets and applications where backhoes retain good market share: municipalities, utilities, large site construction and development and road construction.

What traits make backhoe loaders well suited for these jobs?

“The roading speeds. The ability to work as a loader, trencher, excavator and material handler,” says Brenton. “It’s a versatile piece of equipment that you can drive from site to site.”

He uses the example of a broken water main at 2 a.m. and the ability of a worker to drive the backhoe to the site and start digging before a compact excavator could be put on a trailer.

Yet even in these traditional markets, backhoes have had to make changes to improve performance and increase productivity.

Another way OEMs are seeking to expand the backhoe market is the development of electric models. The electric Deere 310 X-tier most closely aligns with the company’s 310L. The X-tier model has a 14-foot 1-inch maximum dig depth, 6,602-pound loader capacity and 22.8 mph maximum travel speed. The two backhoes vary significantly in weight, however, at 14,669 pounds for the 310L and 16,119 pounds for the X-tier. All these specs are preliminary and subject to change before the X-tier goes into production.John DeereDeere gave contractors and others a first glimpse of the 310 X-tier E-Power at The Utility Expo in September. “The 310 X-tier is geared toward customers who have stated carbon emissions-reduction goals,” says Justin Steger, Deere solutions marketing manager.

The 310 X-tier is in real-world testing with utility client National Grid. Deere consider this to be part of its early first-phase development of clean energy solutions. Phase 2 testing will begin in 2022.

Case has introduced the 580 EV electric model, which was delivered to National Grid in January. The machine is powered by a 480-volt, 90 kWh lithium-ion battery pack. A full charge is expected to be sufficient for an 8-hour workday, depending on application.

Charging can be done with any 220-volt, three-phase connection. Because the battery separately powers the drivetrain and hydraulic motors, Case says, the 580 EV has breakout force equivalent to its diesel counterpart and provides better performance than that diesel model when both the loader and drivetrain are in use.

As backhoes’ share has dwindled in recent years under the assault of compact equipment, manufacturers have had to change not just their machines but their philosophy.

It was once assumed every contractor would have a backhoe and nearly all did. Now OEMs have to consider what segment of the overall market still uses backhoes and what features they seek.

“Electronics are coming in,” says Anderson. “The next generation of backhoe loaders will have much more technology in the controls plus advanced displays.”

He says CNH Industrial is investing heavily in electrification, and that will affect backhoe design at some point.

Brenton says that in the current climate of highly competitive bidding, backhoes can provide critical cost savings that allow contractors to remain in contention for jobs. Carrying costs and fleet management for smaller contractors and owner/operators can be challenging, and backhoe loaders allow those businesses to own and maintain a single piece of equipment that serves many functions. “That won’t work for everyone,” he says, “but it’s a model that many owner-operators have been leaning on for years.” The design philosophy at Kubota includes adding versatility, but it is tightly focused on providing features that make backhoes better at what they’ve always done. The largest of Kubota’s three backhoe loaders, the M62 has a 63-horsepower Kubota engine and six-range HST Plus transmission. Four-wheel drive with differential lock on the front axle is standard. Loader lift capacity is 3,960 pounds. Hydraulic flow is 30.9 gallons per minute, and rear PTO specs are 46 horsepower and 540 rpm. Backhoe dig depth is 14 feet 1.8 inches. Operating weight with loader, backhoe and ROPS/FOPS is 8,925 pounds.KubotaThe two larger models in its three-model lineup, the L47 and M62, include a backhoe crawling mode allowing the operator to creep the machine forward or backward for repositioning while at the backhoe controls. A throttle-up switch increases the power and speed of attachments while maintaining consistent travel speed.

The backhoe also has a quick coupler to expedite bucket and attachment changeovers. These features are especially valuable in disaster relief and cleanup, an increasingly common task for municipalities.

Matt Walker, product manager, Kubota Tractor Corporation, points out that the B26, the company’s smallest TLB (Kubota refers to these machines as tractor loader backhoes, hence TLB) still offers plenty of performance. “The innovative B26 has an operating weight of 4,001 pounds, front loader lifting capacity of 1,102 pounds and a backhoe dig depth of 8 feet 4 inches. With its integrated front loader and quick-detach backhoe, the B26 is compact in size but capable of taking on big jobs.” 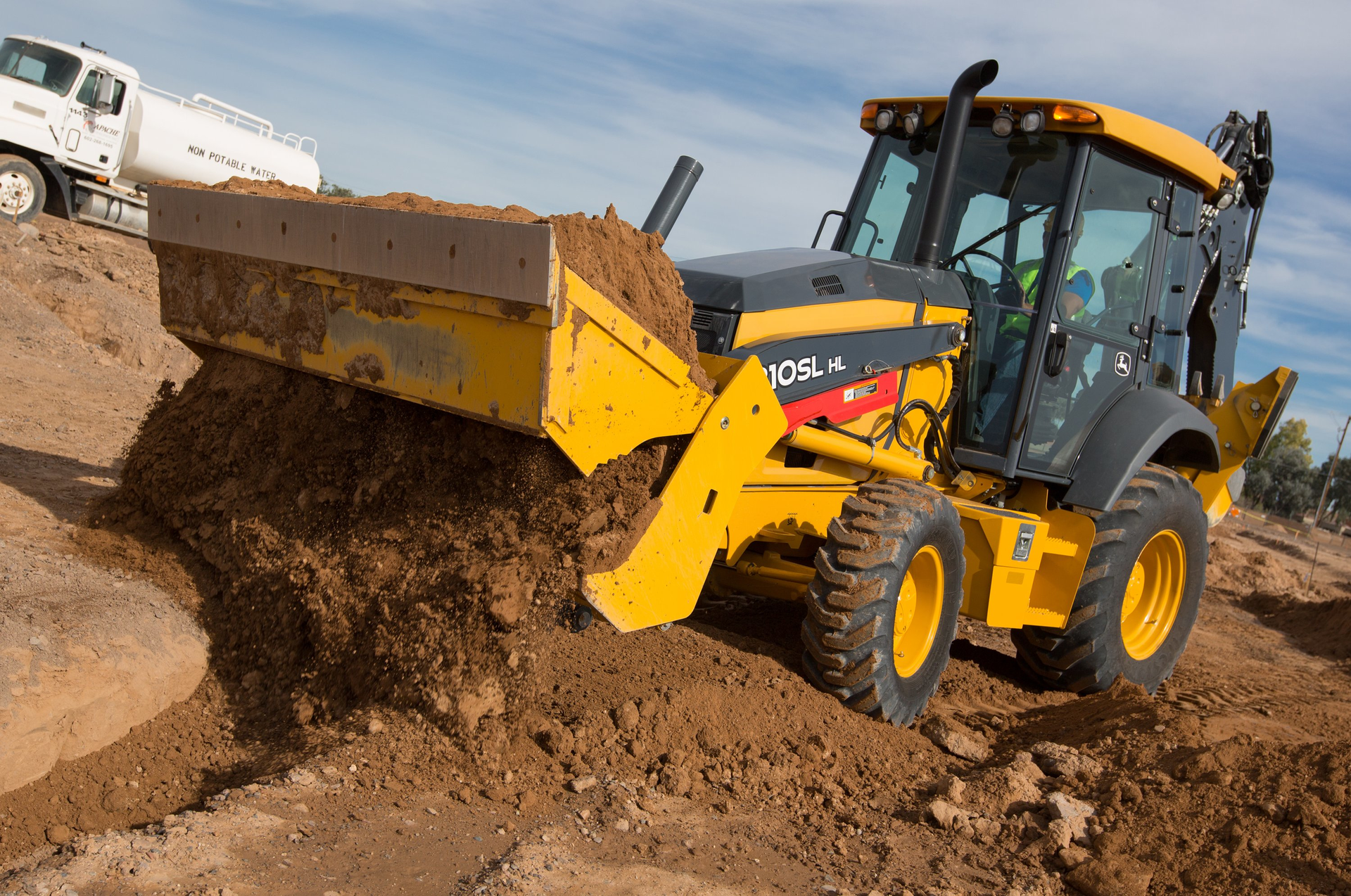 The John Deere 310SL is powered by a Deere PowerTech engine rated at 103 net horsepower. A Deere PowerShift transmission features AutoShift that automatically shifts the transmission based on engine rpm and ground speed. Mechanical front-wheel drive with limited slip is standard and can be momentarily engaged on the fly with a button on the loader control. Lift mode boosts lift capacity up to 15% by setting the engine to 1,400 rpm and maximizing hydraulic pressure for lifting.John DeereL Series models from John Deere have redesigned loader control valves to reduce hydraulic drift and improve metering and control. Maximum auxiliary hydraulic flow has been increased to 35 gallons per minute to run a wider variety of higher-flow attachments. The loader lever linkage has been redesigned to reduce resistance and improve throw and feel.

The 310SL now has pressure-compensated, load-sensing (PCLS) hydraulics for better multifunctioning, smoother machine control and up to 15% greater craning capacity in Lift Mode.

Precision mode cuts hydraulic flow by 55% for precise backhoe work without loss of overall hydraulic lift capacity. Autoshift is now standard. Optional Auto Ride Control eliminates the need to turn ride control on and off during load and carry applications.

The powertrain in the current model features a synchromesh hydraulic transmission. That transmission in addition to a more basic operator station enables a lower acquisition point than the model’s previous design.

The B95C remains New Holland’s backbone backhoe and is especially popular with cemeteries and government customers. It is also available with a TC (toolcarrier) configuration, “but that’s a small percentage of total B95C sales,” says Anderson. In its most popular configuration, the JCB 1CXT has a 49-horsepower engine that requires no aftertreatment; an enclosed cab with HVAC; ISO/SAE changeover; 8-foot extending dipper for a dig depth of 10 feet 1 inch; and skid steer quick hitch. Buckets include a 24-inch excavator bucket with teeth and a 71-inch general-purpose loader bucket with toeplate. Tracks are 12.8 inches general purpose style.JCBOf its eight backhoe models, the one JCB chose to highlight for this article was the 1CXT, which is a hybrid between a compact track loader and a backhoe loader.

“The 1CXT combines skid steer and excavating capabilities in a compact machine with a small footprint, versatility and maneuverability,” says Galvin Rodriguez, backhoe product specialist, JCB. Overall width is under 6 feet, and height is 7 feet 6 inches.

The 1CXT is JCB’s response to the encroachment of compact equipment on backhoe market sectors. It offers typical compact advantages, such as a small footprint, excellent maneuverability, great versatility, compatibility with skid steer attachments and ease of transport, while delivering backhoe operations in confined spaces.

Did you miss our previous article…
https://creativeconstructionma.com/?p=808